As Father’s Day approaches, you’ve likely experienced the familiar scene of shoppers looking through seemingly endless racks of cards for something that expresses their love and gratitude to their fathers. Often the syrupy sentiments lack the depth of true appreciation for the father figures in our lives who have loved and nurtured us.

If you want to skip the crowds this year, but still long for ways to express gratitude to the father figures in your life, you might find it helpful to learn from the lives of biblical men and the example they set of faithful, godly fathers.

Here are four courageous men to inspire your own note to your father this year: 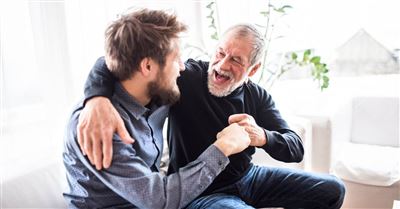 I remember watching reruns of the iconic 1950s sitcom “Father Knows Best” featuring the loving and admired dad, Jim Anderson. He always seemed to be offering fatherly wisdom to his three children for the everyday dilemmas they faced on the show.

While our families are rarely as idealized as the one depicted in the sitcom or our problems as easily resolved, the show highlighted the blessing of a wise father.

In the Old Testament, we find another father who “knows best.” His advice was a blessing not only to his family but the entire nation of Israel. Identified as a priest of Midian, the land adjacent to ancient Egypt, Jethro was Moses’s father-in-law.

Jethro visited Moses and the Israelites where theycamped near the mountain of God, after they crossed the Red Sea and defeated the Amalekites. Jethro was “delighted to hear about all the good things the Lord had done for Israel in rescuing them from the hand of the Egyptians” (Exodus 18:9).

Jethro’s delight turns to concern as he observed the physical and emotional strain evident in Moses, who was judging every dispute among the people. He told Moses, “What you are doing is not good” (Exodus 18:17). Jethro gave Moses some sage advice, telling him to appoint men to serve as judges over smaller groups of peopl, to distribute the incredible pressure that came with caring for such a large community of people.

The Bible tells us that “Moses listened to his father-in-law and did everything he said” (Exodus 18:24). The result was a manageable system that encouraged capable men who were full of integrity to help Moses carry out the task of governing the new nation.

Do you have a father who knows best? Has his advice or wisdom helped you navigate a difficult relationship or enabled you to see a better way to manage your finances or a work project?

I imagine he would love to read a note of thanks for a specific way you benefited from a father who is a man of wisdom. 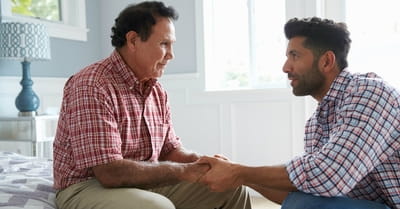 Many dads in the Bible model the importance of praying for their children. We read of King David praying for his son Solomon (I Chronicles 29:19) and Job, a righteous man whose regular custom was to pray for his children and offer sacrifices on their behalf (Job 1:5).

Zechariah, whose prayer for his son is recorded in Luke’s Gospel, is a noteworthy example of a father who prays.

A high priest at the temple in Jerusalem, Zechariah was a godly, respected man who was faithful and obedient to the Lord. However, he and his wife Elizabeth grieved the fact that they did not have any children.

At their advanced ages, Zechariah initially responded in disbelief to the angel who appeared to him in the temple and announced Elizabeth would become pregnant. Despite his first reaction of doubt that left him unable to speak, Zechariah responded in obedience after his son was born by giving him the name John (Luke 1:63).

Zechariah’s gratitude at the miracle of the birth of a son is expressed in a beautiful prayer of praise to God that included a special blessing for this long-awaited son.

It was a prayer that I imagine Zechariah prayed over his son again and again. This tender prayer would have been a great encouragement for John in his role as a prophet because he had the difficult task to “go before the Lord to prepare the way for him” (Luke 1:76).

Do you have a father who regularly prays for you? Consider writing him a note expressing appreciation for all the time he has spent on his knees bringing you and your concerns before your heavenly father. 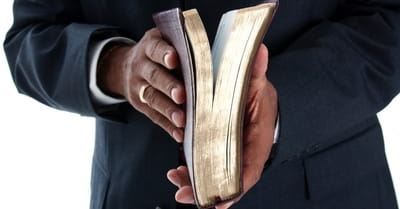 3. Simon of Cyrene, Model of Faith

While faith is not something that is simply handed down from one generation to the next, a life of obedience and trusting God can be modeled and lived out in a manner that encourages faith in future generations.

An example of a biblical father who left a legacy of faith was Simon of Cyrene who makes a brief but significant appearance in the final days of Jesus’s life.

As he is watching the guards who are marching Jesus toward Golgotha (the execution site outside the city walls), he is pulled from the crowd. He is forced to help Jesus carry his cross. Simon’s engagement with Jesus and all he witnessed that first Easter appears to have ripple effects in the lives of his children.

The Gospel of Mark identifies Simon as the father of Rufus and Alexander (Mark 15:21). This is significant because church tradition holds that it is the same Rufus identified by Paul at the end of Romans as “chosen in the Lord” (Romans 16:13). This is a special greeting of distinction among those who were working hard to spread the message of Jesus in the first century.

It is likely that Rufus learned of the Gospel from the eyewitness account of his father who experienced the dramatic events of Jesus’s death and resurrection. Impacted by his father’s actions and testimony, Rufus became an integral part of the early church.

As you look for words to express your gratitude to your father, remember the ways in which he modeled genuine faith to you. It is an invaluable blessing to have a father who started, or continued, a legacy of faith that helped encourage you on your own spiritual journey. 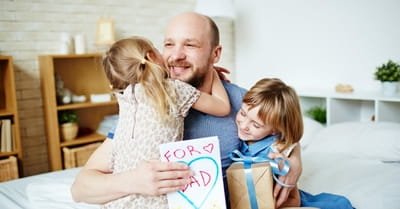 Influential fathers come into our lives in many different forms. While we all have a biological father, many of us also have other men that have shaped and formed our lives in significant ways.

When former President of the United States Gerald R. Ford learned he was adopted at 12 years old, he recalled that it didn’t have a major impact on him because of his relationship with his adopted dad. He remembered, “Dad and I had the closest, most intimate relationship. We acted alike. We had the same interests. I thought we looked alike."

The lack of a biological connection didn’t diminish the impact of Ford’s adopted father on his life.

The apostle Paul called several men in the Bible his “sons,” a clear reference to their close relationship. He referred to Timothy several times as his son (including I Timothy 1:2 and 2 Timothy 2:1) and called Titus, “my true son in our common faith” (Titus 1:4). In letters written to both these men in the New Testament, Paul provided them with encouragement and guidance for godly Christian living undergirded by love.

Perhaps you have a father, or a significant role model, who writes notes of encouragement or provides helpful guidance.

Just as Paul taught Timothy and Titus how to live out their Christian faith, the gentle leadership of a father to provide instruction to his children is a meaningful example to honor.

Why not write your own notes or letters of gratitude?

Ask God to highlight the men in your life who have played an indelible part of shaping your character and your faith story. As you reflect on the many reasons you are thankful for these father figures in your life, especially for the biblical traits they exemplify that have encouraged you in your spiritual journey, why not write a note of gratitude? Rather than simply a Hallmark sentiment, let it be a blessing, inspired by God’s word.

Lisa Samra was born and raised in Texas, Lisa graduated with a Bachelor of Journalism from the University of Texas and earned a Master of Biblical Studies degree from Dallas Theological Seminary. Lisa now lives in Grand Rapids, Mich., with her husband, Jim, and their four children. She is a regular contributor to Our Daily Bread, and her work has also appeared in a variety of publications and online sites. Lisa loves to travel and often finds inspiration from experiencing the beauty of diverse cultures, places and people. Lisa enjoys good coffee, running and reading, just not all at the same time.

This content first appeared on Crosswalk.com and is used here with permission. To view the original visit: https://www.crosswalk.com/special-coverage/fathers-day/4-biblical-fathers-to-thank-dad-for-emulating.html

I have many times stood upon the shore of a peaceful Atlantic ocean gazing East to the sunrise, pondering the vastness and the depth of God. This was not one of those times.